ROCK-STEADY: Despite being a five-piece band with only two horns, the Slackers perform with all the energy and attitude of a jazz big band. (Photos by Jack Reynolds)

Bird & Betty’s at Beach Haven kicked off its concert season last week on a serious pregame mission for the summer, and Saturday night’s lineup surely didn’t disappoint. Beach dwellers of all stripes raged against the elements and were compelled by three exceptional groups, each of them representing a different sphere of a Venn Diagram triptych.

LBI’s beloved band of two decades, The Danksters, set the tone for the evening, with their psychedelic and funky fusion of reggae and surf rock, characterized by wonderfully eerie jamming interludes. They were joined by special guests and “Honorary Danksters” Greg Warren on lead guitar and Garrett Walters on electric saxophone. The set was filled with quirky tracks, such as “Sloths in a Slump,” “Highway Robbery,” and catchy favorite “Surf Party Repeat,” each perfectly capturing the light-hearted whimsy of coastal culture.

Next to hit the stage, as Generation X stormed the floor, was Bayonne-based Crazy and the Brains. The punk outfit, which sounds exactly like the name suggests, is reminiscent of the Ramones, but with a badass keyboardist. The act is led by Christophe Jesus – an angular, studded man with large eyes illuminating the shadow under the brim of his trademark sailor hat. With his singing style bordering on rap and the overall energy and attitude of a garage band, he conjured up a cult of bumping heads and skanking combat boots. A major component of the show relied on the energy of the crowd, and the fervent leader walked up to the audience to stir them up. In fact, by the end of the show, the stage was overflowing with local punks invited to dance. 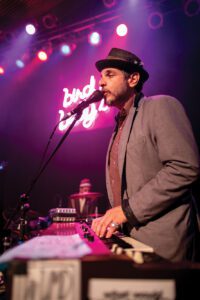 KEYS, PLEASE: Vic Ruggiero commands the piece from his keyboard.

On the second leg of their world tour, the Slackers arrived from Baltimore to headline the show just as things were heating up. They rewound the whole place, with a more traditional reggae rock sound, pushing into the jazzy territory of old school ska and classic rock.

“We’re just starting to get in shape,” said vocalist and keyboardist Vic Ruggiero, who spoke fondly of Baltimore and his fans during an interview with The SandPaper. He described the city as being similar to Philadelphia in that it is a small cultural pocket outside of a larger metropolitan area, with incredible fan energy.

That being said, despite being originally from New York, the Slackers had never played on the Jersey Shore. “Can you believe that?” Ruggiero asked the audience. Based on the crowd’s response alone, it’s easy to predict their imminent return.

Ruggiero was joined by Glen Pine on trombone and vocals, Dave Hillyard on saxophone, Jay Nugent on guitar, Marcus Geard on bass and Jimmy Boom, seated on drums for Ara Babajian, who is recovering from illness. Their sound technician, Marc Crittelli, also deserves an honorable mention. Along with traveling the world with them to ensure listeners get the best experience, he is also the mastermind behind the recording. 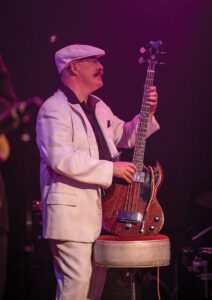 All members of The Slackers met in midtown Manhattan in the late 80s and early 90s. Ruggiero played in several rotating lineups and was frustrated with spending more time in rehearsal than on stage. He took a few guys from each lineup and put together The Slackers, which he says was “born out of impatience”. One repetition, he explained, is worth 10 practices. His bandmates showed great courage in learning by trial by fire.

After a few years working strictly in the tri-state area, The Slackers hit the road in 1996, right after the release of their debut album, Better late than never. Since then they have released 14 more records and amassed a prolific global following with regular international tours.

While big cities like Chicago, Los Angeles and San Francisco “still have a vibe,” Ruggiero said the real magic is in little “pockets of craziness” all over the world. One of his favorites, in the United States, is Lafayette, La. Abroad? A village in the Netherlands was so kind to them that they recorded two live albums there.

Some places adopt different rituals. For example, “in Spain the crowd always sings – sings – with everything.” While it was a bit boring at first, The Slackers turned it around and, in no time, the audience was singing along to every element of every track, including the bassline!

the Washington Post named them “American ska music’s oldest statesmen” and they earned similar titles in publications such as rolling stone and The New York Times. “Sometimes I feel like we put it on a little thick,” Ruggiero said of a reggae band sporting the personality of an authentic New Yorker. Most of them wear suits, fedoras and thick accents and, with only two horns, deliver unforgettable big band energy. 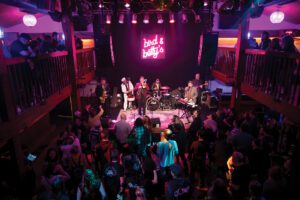 When Ruggiero shared, “We model ourselves a lot on Louis Prima,” it all fell into place. Although Prima was a New Orleans resident, his Sicilian style, swagger and swing were an icon of New York culture and, like ska/reggae, the music he played was jazz. ethnic fusion.

Ruggiero marveled at how one of Prima’s small bands would sonically transform to epic proportions.

“It’s the same with Bruce Springsteen and the E Street Band,” he added. Likewise, he noticed the unique flavors each of his bandmates bring to the table. “Over the years, everyone has to put on a song that I’m more than happy to play,” he proudly proclaimed. As such, he entrusts them with his own writing. “I bring a song and play it through the Slacker machine,” he said. “I trust these guys. They taste good. »

When one individual tries to take control of the whole operation, the group falls apart, Ruggiero explained. This is why the Slackers have remained steadfast over the years. He called them “a bunch of alphas,” all with a different role, like creative direction, managing bookings, building the set list, and more. “We are doing a dance. We learned a lot of respect for each other. 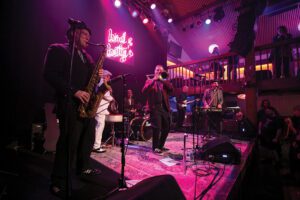 When asked about being pigeonholed into a genre, Ruggiero explained that he’d rather not be biopic about it. “Of course we play reggae; we play old ska – but you can’t deny how much it relates to R&B, blues, jazz and rock ‘n’ roll. The Slackers demonstrated his point midway through their set, breaking down their sound into a simple blues medley and even layering in a few licks and lines from The Rolling Stones’ “Get Off of My Cloud.”

Another quality that has lent itself to their longevity is foresight. For example, when Madonna’s “Like a Virgin” came out in 1984, “we knew it would make great rocksteady!” Knowing that the early 90s was not the time, they put it aside for 20 years and released it when the world was ready for it.

“We always wanted to be a dance group. This is the scene we came out of,” Ruggiero said, referring to reggae as well as the little outcrops of punk rock energy and the “very vital” ska scene, as he described it, that was unfolding. in New York in the 80s. “We love hooks,” he pointed out. As for songwriting influences, he cited Bob Dylan and Billy Joel. “We definitely identify with everything from the 50s to the 70s when it comes to songwriting.”

They have gone to places because they are the misfits and as such relate to everyone. “We never fit enough into a particular scene to be recognized,” Ruggiero explained. “Punks love us because we’re outspoken. Dave, our saxophonist, is very handy, “get up and do it”. 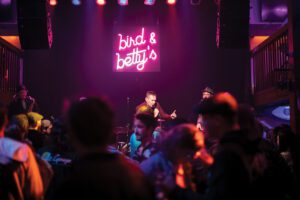 Although their music is not punk rock, their attitude is, as evidenced by their lyricism. They often explore dark human emotions and even delve into political themes. The most unsettling images are carried by vivid metaphor and the buoyancy of a driving reggae beat and ska solos that listeners can’t help but bounce to. Pine’s provocative trombone solos proved particularly moving for the sweaty islanders.

However, as a lifelong cynic, Ruggiero – half joking – apologized on behalf of his generation. “We did a lot of ironic things. I didn’t want to program a world of irony. After a laugh, he said more sternly, “The problem with irony is that it’s not sincere, and the problem with music is that it has to be sincere!”

Ruggiero said they struck a chord with “I Want to Be Your Second Best,” written by Hillyard. So much so, “every time I sing it, it changes perspective,” he added. “It’s the one that touches people.” The Slackers are always looking for “the feeling no one wrote about”. 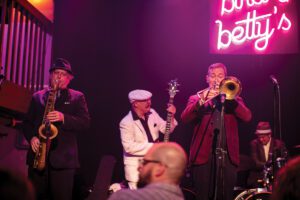 The pandemic has given them every opportunity to feel their feelings and enough time to flesh them out in writing. Ruggiero credited the COVID-19 crisis with teaching them lessons they would never have learned otherwise. First, “it taught us that the Internet is a place.” Second, “it taught us that our fans were willing to stick with us in ways we didn’t expect.” Finally, “it taught us – about ourselves – that we had a strong desire to do this.”

Like many other bands, they broadcast live until 2020. “Every rehearsal we brought a melody,” Ruggiero said. “It was like wildfire.” In 2021, Critelli set up a socially distanced sound studio in his home, running closed-circuit televisions so the band members could safely and seamlessly record their latest album together.

This album, Don’t let the sunlight fool you, released in April via Pirates Press Records. It was their first record in seven years, and the self-titled single shot to No. BillboardCurrent Reggae Chart. Don’t be fooled by the feel-good tune either. This is more than just a cold spring, illustrating a pandemic world and the political atmosphere in which it engulfs. The Slackers gave a stunning performance of this hit and a medley of tracks from their latest record to rival the tearing Northeast away.

From Beach Haven, they will spend the next year bouncing around the world to promote their record. Follow their tour, stream their latest music and stay up to date on theslackers.com. Like the Ramones and Devo, Ruggiero said, “we were always in it for the long haul.”